When Obama got reelected in 2012 the firearms industry turned into a madhouse. Guns flew off shelves, ammo supplies dried up as everyone hoarded what they could find. Soon common calibers such as 9mm .22LR were worth their weight in gold. During this time my father stumbled across a huge sale on .40S&W. Shortly thereafter we were converts. I sold my Beretta M9 for a CZ P-07, and my father his 1911 for a Springfield XD.

Is the Springfield XD worthwhile? Let's find out.

Developed in Croatia as the HS2000, and sold in America by Springfield Armory, the XD is Springfield's flagship pistol. The full size pistol features a polymer frame, some ambidextrous controls, and several "safety" features which divide the community as to the quality of the pistol.

Despite being a full size handgun, the XD only holds 12 rounds in its magazine. The slightly reduced capacity is due to the narrower grips, making the gun easier to grasp by smaller handed shooters. There is very little texture on the frame of the Springfield XD, which can become an issue in adverse conditions. 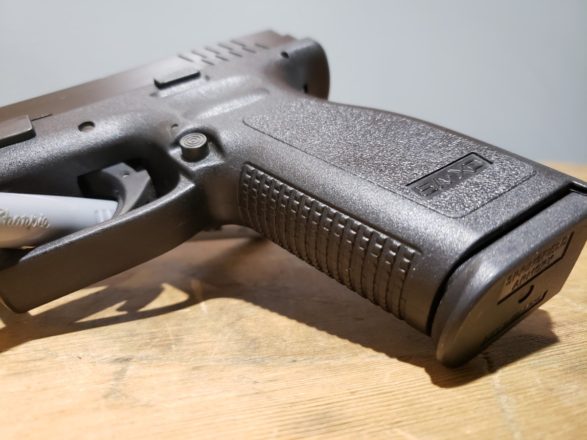 The magazine release is ambidextrous and works well. I've encountered zero issues with the button, although the southpaw side is a bit stiffer--probably from lack of use. Some claim that a strong grip can prevent the release from being activated, though I have never encountered that problem. Magazines eject with vigor and lock in positively.

The slide lock is one of the larger examples on the market. This makes dropping the slide extremely easy during reloads. Manually locking the slide back is equally simple. Despite the oversized slide lock, the XD is one of the few guns I've never accidentally manipulated the lever with.

The factory trigger is unique. The press is spongey, with no discernible break, stacking, or slack. A smooth, consistent pull to the rear until the pistol fires. Reset requires the trigger to be nearly completely released, but does offer a tactile and audible click. Similar to a Glock, the trigger features a safety dingus, which prevents the trigger from being pulled without depressing the middle lever.

My father's XD features a Powder River Precision trigger. This is much more crisp with substantially less travel due to the over-travel stop molded into the trigger shoe. The face of the trigger is much wider and flatter than the OEM, which most shooters appreciate. Much like the OEM, the upgraded trigger still has no noticeable stacking, slack, or clean break.

At the tang of the pistol sits a rather small grip safety. While this works well on a 1911, the grip safety on the Springfield XD leaves something to be desired. Several shooters failed to activate the lever due to improper grips, preventing them from firing. Newer models have increased the size of the grip safety, helping to reduce this issue.

Atop the slide, just behind the ejection port, lays a loaded chamber indicator. Personally I am opposed to loaded chamber indicators for two primary reasons. This is another small opening in the pistol where dirt and debris can ingress the gun, potentially causing malfunctions. Like all mechanical devices, this indicator has the potential to fail. I have seen first hand guns that were loaded, but did not have a properly functioning indicator. Lazy owners may take a flush indicator as an empty gun without verifying the chamber, potentially leading to a negligent discharge. 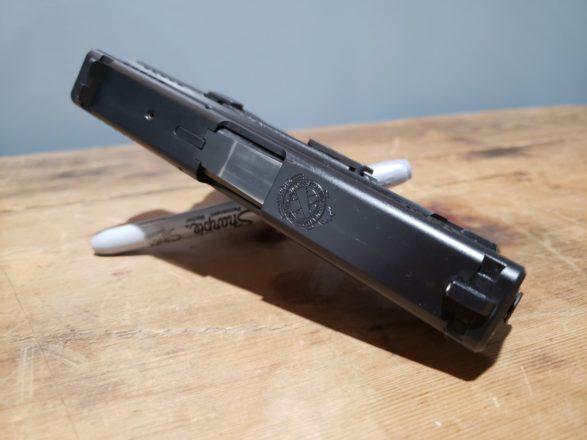 The Springfield XD is the softest shooting .40S&W pistol I have ever fired. As a recoil sensitive shooter, most .40's are something I avoid--being even more unpleasant than some larger calibers. Springfield has managed to tame the snappy recoil, creating a pleasant gun to shoot.

Frequently using his truck as a holster, my father's XD is regularly home to dirt, hair, and other debris. Even when going un-lubricated for months, and filled with all sorts of gunk, the Springfield XD has been extremely reliable. The only malfunctions coming from shooters limp wristing the gun during shooting.

Final Thoughts on the Springfield XD

That being said, I feel that the Springfield XD series is more than suitable for the typical shooter. Most gun owners will fire only a few hundred rounds or less throughout their lifetime. This means that they will probably never run into the issues seen with the XD line by serious shooters and instructors. While we shouldn't buy into less effective equipment, an XD is probably less likely to get you killed in the streets than a lack of training.

The Springfield XD isn't a bad gun. It also is not a "duty" grade gun. Much like with the Ruger Security 9, the Springfield XD is good enough until it isn't. For serious use, look elsewhere. For a plinker or light use gun, this may be for you.

Today, Springfield Armory announced their latest pistol, the Hellcat Pro. This new addition brings the Hellcat a bigger brother, along the lines of the SIG [...]

Today Langdon Tactical revealed their latest improvement to the conceal carry world, the Hellcat LTT. Langdon is widely known for incredible custom work, and is [...]