I was fortunate enough to get to attend Tatiana Whitlock's Handgun Accuracy class recently. Despite the ammo shortage and ongoing travel restrictions, the class was held as planned. I have been looking to attend one of Tatiana's classes ever since I became aware of her. There are not a lot of female instructors that teach defensive courses, so this was a great opportunity to learn from someone who does what I want to do. What follows is a brief after action report of the one day class.

Class took place at Royal Range in Nashville, TN. The range is truly unique among the many ranges I have had the opportunity to shoot at. It used to be a movie theater but now houses one of the largest most and inclusive training facilities around. 40,000 Square feet of indoor space is divided up into a pistol range, a rifle rage, classroom space, retail space, event space, and a 15,000 square foot urban training area that includes a shoot house. If you have the opportunity to take a class here I highly recommend it. 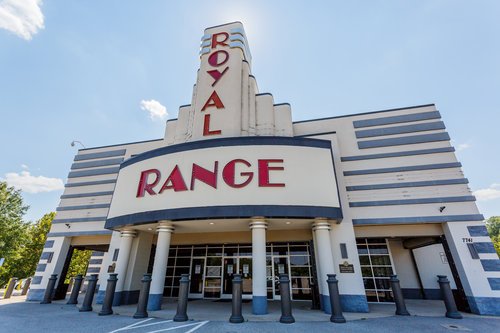 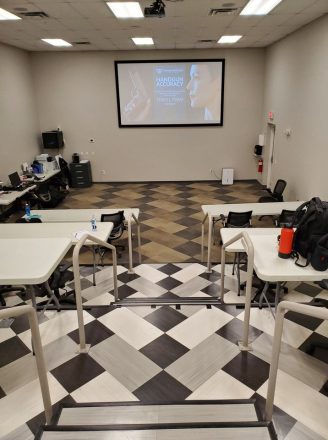 I used my Glock 48 for class. At the time it was stock except for the added Tau Striker Control Device and Dawson Precision fiber optic sights. I brought my Raven Perun OWB holster as well as my Tenicor Velo IWB holster but never got to use either. Tatiana made the executive decision to not advance to drawing from the holster based on the overall skills and progression of the class. It was a little disappointing, but I appreciated the fact that she was that dialed into the attendees and their abilities. Some instructors will proceed with their curriculum come hell or high water.

The other attendees brought a variety of guns to the class. There were three Sig P365s, two other Glock 48s, an HK VP9, a Glock 17, and a Sig P365XL. One of the shooters had ongoing feeding issues with her gun and ended up renting a gun from the range to use.

Attendees consisted of 3 men and 5 women. There was also a professional photographer present who did not shoot (guns anyway, haha). This was the first class I have attended where the number of women was more than the number of men. It was an interesting dynamic as I am used to being either the only, or one of few, females in a class. Skill levels ranged from a brand new shooter who had never shot before, to a retired police officer. Two of the women were instructors for Royal Range and one woman was an immigrant from the Congo who had experience living in a war zone.

Classroom time was brief but informative. Tatiana gave a history of how she became a firearms instructor and her style of teaching. I was personally excited to hear her history because it is similar to the path I have followed so far. She gave credit to mentors who have helped her along the way and shared that just like us, she strives to learn all the time.

Coarse goals were listed and include:

Each principle in the course goals was reviewed in detail and words of wisdom were shared. My favorite was that it's all about you, not the gear. Your gun is more accurate than you so you have to ask yourself “what does the gun need from me to be successful”. I think so often people blame the gear when the issue is really the person looking back from the mirror each morning.

After the safety briefing, including safety procedures and roles, were discussed we took a short break before moving to the range. Once on the range things got down to business. Each lesson consisted of some discussion, instruction, and a shooting session to practice what we learned.

The Handgun Accuracy class is very much a “from the ground up” kind of class. We started with instruction on how to get into a solid, heart forward stance. Tatiana refers to the process as “the stance dance” and is something I have used with new shooters since learning it. We stood with our feet together and rotated the toes of our right foot (or left of you're left handed) out to 90 degrees, Then you rotate your right heel out so your feet are both facing forward. Finally you step out one foot's width and settle in. I personally use a more modified fighter's stance, but this is a great way to introduce stance to newer shooters.

Once everyone had established a good stance, we move up to work on grip. We spent a bit of time on the importance of a good grip as well as some of the common issues people have. Tatiana worked with each shooter in class to evaluate and adjust their grip as needed. We did a few shooting drills to see where people were hitting at this point. Each target was dissected and analyzed, and suggested adjustments given. For me personally, the discussion on grip was the most helpful as I made a few adjustments that really brought things in.

After the grip discussion we broke for lunch. During the break Tatiana graciously gave me an interview which will publish as a separate article. As we were wrapping up a few other students wandered back into the classroom and people chatted about all the great information received so far.

We returned to the range after lunch and moved right into trigger work. Tatiana told the class to think of the trigger like a gas pedal or brake in a car. You need to know where it engages and how much dead space there is. This was a great tactile and visual comparison that almost everyone can relate to. After trigger work we moved on to the final component; sights. Tatiana explained that you should always be patient with your trigger and greedy with your sights. We were also reminded that no matter what you do, there will be some wobble in your sight picture because you have a pulse. The goal is to control it, not eliminate it.

We wrapped up our range time by doing the compass drill, which I'll write about in a separate article, and shooting for accuracy at different distances. After going through several rounds shooting between 3 and 25 yards we closed the range session and headed back into the classroom to debrief.

Tatiana discussed some of the things she saw from class and explained why she had decided not to move to drawing from the holster. There weren't any safety issues, just some differences in skill level. Like most classes we finished up with a round-robin where everyone had the opportunity to share their thoughts about the class. I always enjoy this part because you sometimes catch something you missed.

I learned so much in this class! Most importantly to slow down, breath, and just take the shot. I've been incredibly fortunate to train with some amazing instructors, but this was my first truly foundational class. It took all the bits and pieces I've learned over the past year and put them together in a bottom to top format that was really beneficial. It was really great to see both men and women in a class lead by a female instructor. I definitely have strong opinions about female only classes.

Tatiana is a patient instructor and a talented shooter. She offers a ton a great advice and gives each student personal attention and instruction to help them improve. The Handgun Accuracy class isn't going to make you an Operator, but if you are looking to shore up your basic skills this is a great option at an affordable price. I definitely recommend it for everyone, especially newer shooters. I look forward to taking some of Tatiana's other classes in the future.