Micro Red Dot Sights (MRDS) are becoming more popular by the day, and with them, mythology. Some shooters overstate their advantages, with more claiming that the technology is nothing more than a toy. With so much misinformation out there, it can be challenging to find the truth. So why should someone use MRDS on their pistol?

When aiming with irons, your target is obscured by the front and rear sights. The target is further obscured by the standard front sight focus. So not only are we not focusing on the target, but we are also physically blocking our view. This inherently has issues, as not being able to see a threat can cause delays in our reactions if we need to apply or reduce force based upon their actions.

A red dot fixes this. The large window provides a clear picture of the threat and its surrounding area, enhancing our ability to see their actions. With a dot, we focus on the target during shooting, which allows us to clearly see them, instead of a traditional fuzzy-target sight picture. The smaller reticle also covers less of the target.

Now instead of trying to manage three separate focal planes (rear sight, front sight, target), we are managing one. This is the same way we operate virtually every other weapon, with a threat focus. When you throw a punch, you target focus. Our ancestors using spears, bows, and more, used target focus. While we evolve over time, we are built for target focus for situational awareness and precision.

When shooting with irons you have 2 methods to aim. These are the irons, and point shooting using the slide as a reference. Irons frequently fail, falling from their mounts, bending or breaking with impact, and more. I've personally experienced more failures with iron sights than slide mounted optics.

Adding an optic provides three additional sighting methods. These are the reticle, the guillotine method, and the ghost ring method. Shooters can bisect their target using the hood of the optic, which can provide substantial accuracy. I personally can pass The Test with over a 90% using this method. It is more effective with shorter optics such as the RMR or 507c.

You can use your window as a reference point for aiming during an electronics failure. This is more useful at closer ranges, and is the least accurate of the bunch. Pairing with a tall front sight can improve accuracy, similar to ghost ring sights on a shotgun.

You also have your back up irons, and your slide for aiming as well, bringing total options to five. This gives you substantial redundancy to keep you from dying in the streets.

The average front sight presents itself as roughly 12MOA based upon our visual perception. Most red dot optics have a 2-4MOA reticle, with some going smaller and larger. This means the average reticle is 3-4x smaller than the average front sight. This provides a much more refined sight picture, offering enhanced precision. With smaller reticles, increasing brightness can simulate a larger dot if less precision is desired.

How does this translate to real life? Prior to transitioning to red dot optics, my pistol was equipped with XS F8 sights. These completely covered up a B-8 Repair Center target at 25 yards. Not the 5.5 inch black area, but the ENTIRE 10.5"x10.5" piece of paper. Using a 2-4MOA reticle, you're not even completely covering the 1.5 inch X ring.

Red dots offer benefits during training as well. The refined sight picture gives enhanced feedback making it easier for the shooter to diagnose issues with their technique. Instructors such as Tom Givens and Scott Jedlinski refer to this as a pocket sized instructor.

In my experience with my students, they are able to understand a MRDS equipped handgun much more easily than an iron sighted handgun. This results in both higher accuracy and faster shots much more rapidly than with they achieve with irons. The majority of my students have either never fired a handgun before, or have extremely limited experience and are not gun owners. I almost exclusively train new students using optic equipped handguns based upon my findings. Those with more experience typically struggle to find the reticle due to flaws in their presentation that are inherent to irons. 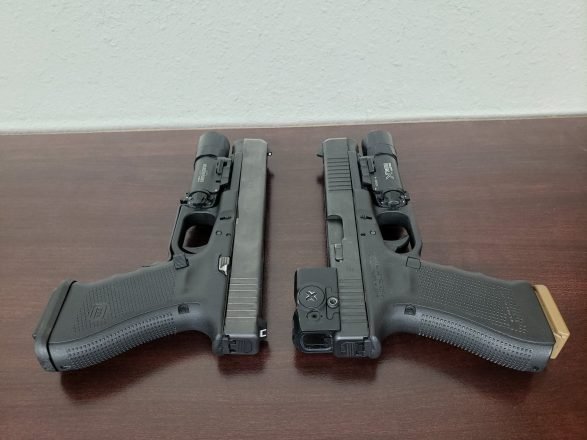 I think someone transitioning from irons to optics will have a difficult time and need significant training to make the transition. If someone is starting with an optic, with no other experience, that learning curve is diminished. Especially when they have an understanding of how MRDS function. Understandings such as a perfectly centered dot not being necessary, having a target focus, and other methods of aiming such as the guillotine.