Today's Power Drill is a simple one: The Test. Popularized by Ken Hackathorn and Larry Vickers, The Test is a drill that emphasizes sight alignment, grip, and trigger control. The Test uses the venerable NRA B8, a target that can be printed on 8.5"x11" paper. 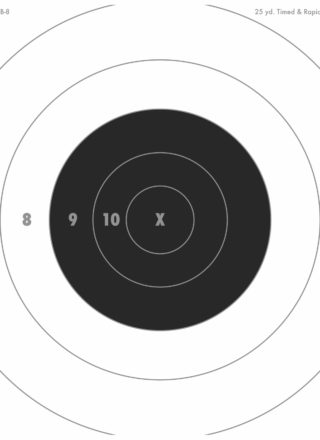 How to shoot The Test

Shooter begins standing at 10 yards, with 10 rounds loaded in the pistol. At the buzzer, the shooter has 10 seconds to fire those rounds onto the target. The Test is typically shot from either low ready, or from the holster. For new and beginning shooters, low ready is the optimal way to shoot The Test, as to best isolate focus on the fundamentals being worked on here. With more experienced shooters, drawing from a holster, whether it be open or concealed, adds in an additional repetition to help build the draw-stroke skill. 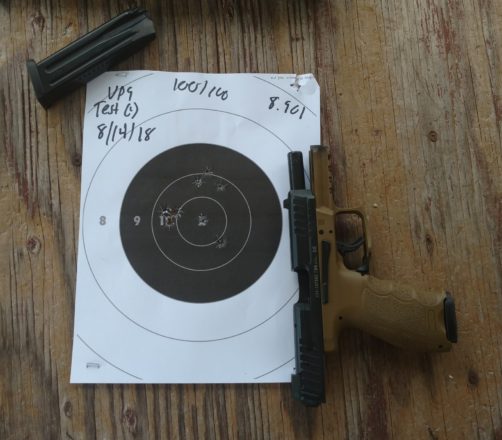 The Hackathorn method, (our preferred scoring system), is a point based system. Hits in the X and 10 ring are 10 points, hits in the 9 ring are 9 points, 8 ring hits are 8 points, and 7 ring hits are 7 points. Passing score with the Hackathorn method is 90 points or 90% of the possible score. Rounds that land on the circular ring line score up, being a "breaking the line" point. When shooting The Test with a handgun that holds less than ten rounds, scale the par time and score minimum down. For example, a 7 round gun has a 7 second par time, with a 63 point passing score.

Why shoot The Test?

Well, The Test is an easy drill to set up; it uses a very commonly shot target, is shot at a distance available at most indoor and outdoor ranges, and can be done with pretty much any handgun. The Test is also a fantastic benchmark test. With how repeatable this drill is, progress can be tracked fairly simply. The focus of this drill is handgun grip, sight alignment, and trigger control, three skills that can depreciate quickly without either dry fire, or live fire practice. If you've been slacking in your dry fire practice, it'll show on The Test, or if you've been getting those reps in, that'll show too.

At the end of the day, The Test is and will remain, a classic drill. Everyone should give this drill a shot, so grab a stack of B8s, a shot timer, and give it a go!