When the Cody Firearms Museum chooses a company to kick off their collectors series, it only makes sense that they chose to partner with Henry Repeating Arms. The first Cody Museum collector rifle will be a .22lr Golden Boy that features a beautiful engraving inspired by an 1860's Henry rifle in the museum's collection.

The run of 1,000 rifles will carry a special serial number ranging between 2019CFM001 to 2019CFM1000 and also have "Cody Firearms Museum Collector Series" marked on the top tang of the receiver. 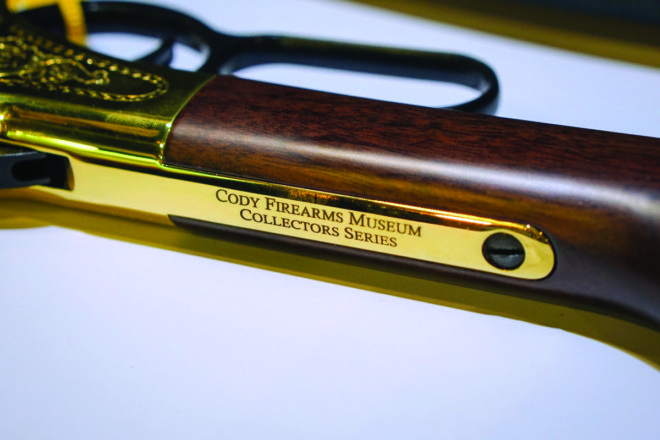 No word on price yet, but the rifle will be sold through Davidson's Gallery Of Guns exclusively. Check out the Henry Repeating Firearms website for more information.

The Cody Firearms Museum boasts the most comprehensive collection of American firearms in the world, and their new Collector’s Series gives the public the opportunity to own collectible firearms inspired by prized pieces in their collection. The first offering of the series is a unique rifle built on the award-winning Golden Boy platform manufactured by Henry Repeating Arms, engraved by Baron Engraving of Trumbull, CT, and distributed by Davidson’s of Prescott, AZ.

The engraving is based on a Samuel Hoggson factory engraved 1860’s era Henry rifle that is currently held in the Cody Firearms Museum. Both sides of the receiver cover are embellished with a large grape leaf motif on the front panel and a leafy scroll pattern on the main panel. The top tang of the receiver is engraved with the words, “Cody Firearms Museum Collectors Series.” The Golden Boy platform utilizes American Walnut furniture and a blued steel octagonal barrel in homage to the original Henry rifle that came before it. The 1,000 rifles in the initial offering will be serialized 2019CFM0001 – 2019CFM1000.

Henry Repeating Arms, Baron Engraving and Davidson’s, the exclusive distributor of this series, have joined together to help raise money for the exhibit with each company contributing a portion of the proceeds from this project to support the revitalization of the Cody Firearms Museum. The combined efforts of the three donors will raise more than $100,000 for the Cody Firearms Museum in 2019. In addition, Henry donated a New Original Henry rifle that will be hand engraved by Baron which is expected to raise up to $50,000 more at auction. Davidson’s has also committed to an annual $50,000 donation for the next 5 years.

Anthony Imperato, President of Henry Repeating Arms says, “The Cody Firearms Museum is a must-visit for anyone interested in firearms or American history. It’s truly an astonishing collection and we’re very proud that we’re able to be a part of this new Collector’s Series.” Imperato continues, “Firearms play such an integral role in our nation’s history and anything we’re going to jump at any opportunity to ensure that this collection stays around for more generations to enjoy.”

Today's video is going to be on the Henry Big Boy Steel .357 Magnum lever action. The Big Boy is one of those rifles that [...]