To shamelessly paraphrase part of Tom Givens's safety lecture, one power we as gun owners share with the ancient gods of myth is the ability to smite things and people from a distance.  With that great power comes great accountability.

This week, I prosecuted a man because he negligently discharged his Glock 43 when he attempted to dry fire it inside an occupied commercial building.  The important details are:

When you handle a firearm, never forget that you are handling a real gun with real bullets which have real consequences attached to them.  "Oh my god, I'm so sorry" has no effect on the bullet hole.  No amount of blaming the gun or the circumstances will excuse your carelessness from the consequences. 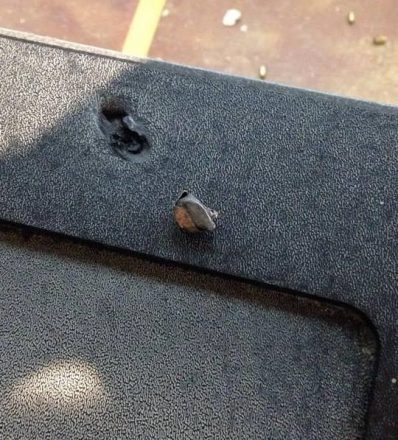 The after-effect of a negligent discharge I witnessed when I was a range safety officer, with recovered .40S&W bullet.

Regardless of whether you have "been around guns all your life" or you're a firearms instructor, you simply must ingrain good safety habits.  You are not infallible.  The big, loud, unexpected noise can happen to you.

This man walked away with a diversion -- basically, assuming he keeps his nose clean for a period of time, he will have no criminal record.  He spent thousands of dollars on an attorney.  He was liable for several hundred dollars worth of property damage.  Perhaps the worst consequence, he went through a process which is foreign, unpleasant, and uncomfortable to most law-abiding citizens.

Thankfully, he only destroyed property.  All in all, he was punished lightly.  If you are careless, you may not be so lucky on either count. Accountability for your actions will be held, both by you and those around you.

The Test with No Name | Skills and Drills

The Test with No Name is not only a mouthful, but is also a great challenge. With four reps under my belt with this, I'm [...]

The Armed Teacher Part I: Legality in School

It’s that time of year again, kids are going back to school! As an educator I have spent the past two weeks attending in service [...]

Things have been pretty crazy so far this year, but it is exciting to see so many new gun owners. Being a gun owner is [...]