I started my "Fauxland Speshul" project back in 2019, and after choosing my light and optic, it was time for the compensator. I did some research, and ended up choosing the Parker Mountain Machine (PMM) VP9 Compensator. I've been using it since Fall 2021, and have gotten a lot of rounds through it. How did it perform, and is it worth a buy?

What is the PMM HK VP9 Compensator?

Parker Mountain Machine is a New Hampshire based shop, that sells a lot of firearm components. Most people probably know them for various handgun compensators, and that's all I've ever bought from them. Their compensators are known to be tested, reliable, and aesthetically pleasing. The PMM VP9 Comp aims to be no different.

With compensators, there are a lot of things that play into your choice. If it has too many ports, it may reduce recoil and slide speed enough to impact reliability. If the shape isn't quite right, it might bump into WMLs or not work in certain holsters. With the PMM VP9 comp, it is specifically made to be mated to the VP9. Not only does it aesthetically look like a continuation of the slide, but it is made to maintain a lot of the compatibilities of a non-compensated VP9.

The PMM VP9 comp has a 7075 aluminum construction, with single port design. Some shorter slide guns can get away with a bigger comp, but a single port seems to be best for the more full-size slide guns out there. PMM sells two variants, one with the front sight on the comp, and one without. I went for the standard comp, as the sight radius doesn't matter to me. The normal comp runs $100 even, if purchased alone. PMM sells a mounting block to make installation easier, but I did not partake.

The comp is offered for both 1/2-28 threads, and the HK M13.5x1 left hand threads. I have been using an older Victory First VP9 1/2-28 barrel for a while, so I got my comp threaded for that. How was the mounting and fitment of the comp?

Mounting the PMM comp is not hard at all. PMM includes shims and loctite, so that you can properly time the comp, and secure it in place. I used red loctite, as I do not want the comp moving without me heatgunning it off. No set screws here either, which is a joy. 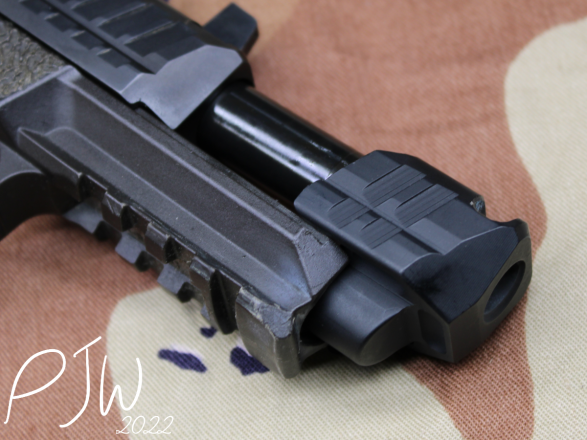 The neat thing about the PMM VP9 comp is that it slightly recesses into the frame when the slide moves reward. It is only just a hair, but it helps to maintain the lines. When fitting the comp, it is also a helpful trick to make sure it is timed properly. Fitment against the slide is a tight, but that's good. Once your loctite has time to set, the gun is good to go.

I mounted the PMM comp onto one of my milled VP9s. The gun has an ancient Type 1 RMR06, and the slide work was done by ATEi. Other than the milling and installation of new sights, the slide is stock, and the frame has had no trigger work done.

How much did the PMM VP9 compensator help to reduce recoil? Did it impact reliability?

Since mounting the PMM VP9 comp, I've put about 5,000 rounds through my gun. I exclusively have shot brass cased ammo, mostly FMJs. I mainly shoot 124gr loads, but I've put plenty of 115gr lighter loads through the gun. About 250 rounds of that 5000 were HST/Gold Dot 124gr +P, which is my preferred carry load.

I had zero malfunctions during the entire testing process. I had no short stroking issues, which can be common with comps. Hell, the slide even continued to reliably lock back on all of my magazines. I also tested with and without a WML attached to the frame, and reliability remained perfect. No baffle strikes to report either. Needless to say, this is really impressive.

Now, the recoil impulse certainly changed. The recoil of the VP9 isn't harsh or stout, but it was certainly reduced, and modified. A lot of the upward recoil is just gone now. The impulse is mostly just a push rearward, and it is light. When I'm teaching handgunnery to new shooters, I move them from a .22 to this gun, as this is easily my softest shooting 9mm. For new shooters, this lessened recoil leads to more confidence for follow up shots, and for the experienced blasters, it means faster follow up shots.

I've shot a lot of Tests over the years, and the comp really allows you to shoot them faster. Blast out of the top of the comp has also not been distracting, whether at daytime, night, or under NVGs. Overall, I really, really have enjoyed the PMM VP9 compensator.

Is This the Compensator For You?

If you have a VP9 and want a comp, this is kind of the only option in town. However, you should consider yourself lucky, as it is a great comp.

The PMM VP9 comp did the advertised job well, and with no malfunctions. Now, I didn't use VP9ORs, but rather a milled gun, so your mileage may vary. I was very much ready to have to tinker with my gun to make it run reliably with the comp, however, I was happy with a pleasant surprise. Just having the comp function out of the box was a treat. Unreliable guns are my least favorite thing about shooting, so I'm tickled here.

I don't really have any gripes about this comp. It only fits on standard VP9s, so if you have an SK or L model, it ain't gonna work. My specific PMM comp is also a different shade of black than my slide, but that does not bother me at all.

I'm already planning to add a second PMM comp onto my ACRO'd VP9. The PMM VP9 comp gets a solid recommendation from me.

Heckler & Koch USP40 | I like the Springfield XD Better

All of us have guns we've fallen in love with because of movies and video games. For some it was the CZ-75 from Gunsmith Cats, and others [...]

I'm sure that everyone knows what a Roland Special is. Named after the work that Chuck Pressburg had done on his Glock 19s, a Roland [...]