The HK VP70. It's a handgun that most people think is crap, however, it was an extremely important design. It was the first polymer framed handgun, and was high capacity for the era. The VP70 also has some idealistic, but poorly implemented features. Should the VP70 be remembered in the Hall of Fame, or the Hall of Shame?

The HK VP70 is a polymer framed, striker fired pistol, made by Heckler & Koch. The name "VP" stands for "Volkspistole", or the "People's Pistol". The "70" stands for the first year of production. Unlike later HK pistols like the Mark 23, the VP70 was not made specifically for a military contract, but was developed rather as a defensive gun for a hypothetical Soviet push into West Germany during the Cold War. 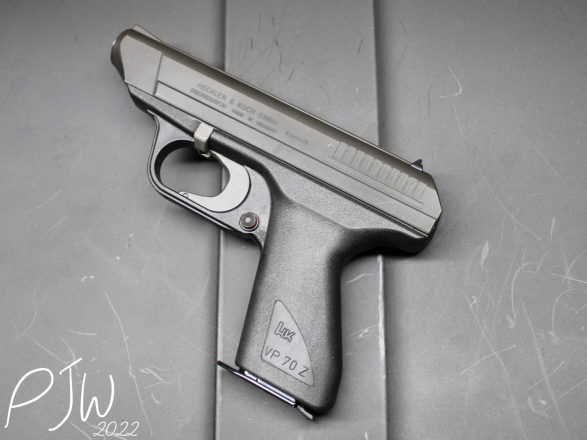 Two variants of the VP70 were developed, the "M" & "Z". The "M" or "Military" model was made to be fitted with a shoulder stock/holster combo that allowed the gun to fire in three round burst mode. The "Z", or "Zivil/Civil" model was a traditional handgun, with a semi-auto function only. The focus of this article is mostly on the VP70Z however, as they were the most prolific models.

Production of the VP70 ran from 1970-1989, with mostly "Z" models being made. Handguns were made in both 9x19mm and 9x21mm (Italian market) calibers, however, the VP70 failed to be a market dominating gun. By the time that the VP70 was discontinued, Glock was dominating in the handgun market.

The VP70 had some good, and bad features. Some were cutting edge, and others were a step back.

The feature set of HK's first polymer handgun was certainly distinct, but not all are good features.

What are the positive features of this unique handgun?

The VP70 was cutting edge for it's polymer frame, and high capacity. Polymer was mostly used for firearm furniture during that time period, so an entire frame made from the stuff was future technology.

Magazine capacity is also massive, at 18 rounds. The norm for the era was anywhere from 6-13 rounds, so 18 rounds is a massive improvement. The magazines are also double-feed magazines, as opposed to the single-feed style that is common today.

It might seem short, but those are the positives for this HK. What are the bad features?

The (Quite) Bad Features

Being first doesn't always mean that you are a winner.

The trigger on the VP70 is often the butt of jokes, and for good reason. It is shaped like a staplegun's trigger, and has weight to equal it. When I first got my handgun, trigger pull was somewhere around 15lbs, which is about the max on my gauge. It was smooth, but heavy as can be. It is a straight pull trigger too, so the feel is quite strange. Even with the heavy pull, HK thought to add a crossbolt safety.

The sighting arrangement on this HK is also quite strange. Rather than a standard front and rear sight, we've got a polished ramp front sight, with a groove for aiming. The idea is that you'd use the shadow cast into the groove as the point of aim, which is dubious at best.

The last feature of the VP70 is its strange locking system. Rather than use a standard blowback operation, this handgun uses gas delayed blowback. The rifling in the barrel is cut deep, so that gas can slip past the bullet when the gun is fired. This gas is jetted forward, which slows down the slide's cycling, retarding the action. While the slide on the VP70 is big, it is not exceptionally heavy, so the system works. However, a downside is a loss in bullet velocity, so we've essentially got our 9MM turning into .380 ACP.

With the gas delayed blowback, the gun gets quite dirty. Luckily, takedown and cleaning is quite a breeze.

While the VP70 has some good features, it may seem like the bad ones tip the scale unfavorably. What's a freshly unboxed VP70 like?

I Love the Smell of VP70 In the Morning

The VP70 I have is one that I won at a Rock Island Auction late in 2021. The gun was in fairly pristine shape when I received it, and included two magazines and the original box.

The box is simple cardboard, with metal reinforcements on the corners. This really hits the "people's pistol" idea, of simple packaging. The stickers on the side also tell an interesting story, as someone paid $750 for this VP70, used, in 1986. That's over $2,000 in today's money! I personally paid $900 for this specimen, so I know that at least $2900 has exchanged hands for this gun over the years, maybe even more!

Ok, so maybe not the most "people's" of "people's pistols". How does it shoot?

VP70 At the Range

Prior to firing a single round, I immediately ripped the gun apart, and swapped the striker spring for a Wolff reduced power one. This dropped the trigger pull from 15lbs, to a sultry 10.5lbs. I could work a lot more with that. From there, I began my range trips.

The first thing to note about shooting the VP70 is actually loading the magazines. With the double-feed design, loading the mags is much easier than on standard single-feed magazines. However, the fitment of the magazine into the magwell is tight, and the heel-release doesn't make that any easier.

The trigger does suck. Even with my upgrade, the trigger is still hard for most people to use. As someone that has shot many revolvers, this trigger feels like a straight pull revolver trigger. I don't hate it, but it is hard to use.

The recoil impulse is strange, due to the gas delayed action. It is slow and hard, but not unmanageable. With the flats on the frame near where the slide meets, the gun does start to hurt to shoot after a few hundred rounds. With a modern, high grip, the corner of that flat goes right into the webbing of the hand between the thumb and index finger.

Holy cow, the sights. I can honestly get around the trigger and the recoil, however, the sights are terrible. Since your front sight is a ramp without a specific aiming point, getting the elevation right for your holds is really wonky. I've painted the front sight, and that has helped a little bit, but only a little.

Despite the flaws, I've gotten some good "The Test" scores using the VP70.

Despite my gripes, I love shooting this gun. I'm also a nerd, which dovetails into...

Like many cool guns, the VP70 has appeared in media. However, there are two standout VP70 appearances that I want to cover.

James Cameron's 1986 film Aliens is one of my favorite films of all time. It is an excellent sequel, and a great standalone movie. Throughout the film, the various Colonial Marines can be seen with VP70s holster, or in use. The VP70 was chosen as the sidearm of the marines in the film, due to it's futuristic look. I'd have to agree with that decision, as the gun does look much more advanced than it actually is. If there is a bughunt to be had, bring along a VP70.

The second notable appearance of the VP70 is in the Resident Evil series. The VP70 was the sidearm of choice for rookie RPD office Leon S. Kennedy, starting in Resident Evil 2, up through the subsequent games. In Resident Evil 2, Leon's VP70 is the "M" model, and can be upgrade with the 3-round burst stock later in the game. Resident Evil 2 is one of my favorite videogames to date, so the VP70 was a must in my collection. It's the perfect handgun to immediately stop using the second you get a shotgun!

In both Aliens and Resident Evil, the VP70s used are early models, with different slide serrations, and slightly different frames. This models were never really commercially available, so it is interesting to see them show up in media.

The Most Important Handgun You Shouldn't Buy

The Heckler & Koch VP70 is not a good handgun. However, I think it is an important handgun. Without it, polymer frames may not have caught on until much later in time.

Without the VP70, I'd bet that Gaston Glock wouldn't have made the Glock 17 in 1981. I'm sure it would've happened later, but the VP70 was a stepping stone to a better design. Being first never guarantees being the best, but someone has to be first.

I love the VP70 due to its historical significance, and the ties to media I enjoy. In modern times, this is a novelty gun, but I personally need a novelty gun. The majority of handguns I own are all practical, and you know what they say about all work and no play. Even though this gun has features that make it suck to shoot, I enjoy pushing myself to try and make them work. There's some form of joy that hits the lizard-brain sections of my body when I shoot well with the VP70, but that's probably TMI.

Should you go search for a VP70? Unless you are a massive handgun nerd, or a movie or game buff, this is an easy avoid. I doubt that a normal shooter would want to drop over a grand on a handgun that shoots poorly. Thankfully, I'm not normal.

I'm sure that everyone knows what a Roland Special is. Named after the work that Chuck Pressburg had done on his Glock 19s, a Roland [...]

The wait is finally over. Following the latest trends in compact firearms, Heckler & Koch recently unveiled a shorty version of the civilian MP5k, the [...]