Below are some notes from Range Day during SHOT Show 2020. These are nuggets of information that may not have necessitated an entire article each, but that are still of value to the readers.

The Python is the one gun on display for Colt at range day. A single 6 inch barrel and 4 inch barrel were available for shooting. I fired a few cylinders out of the gun on both double and single action. The DA pull is fantastic, one of the best I've felt. This may be the easiest trigger to pull straight through, with no stacking, walls, etc. Just a smooth, consistent press. Using the 6 inch model I was able to make several hits on a man size steel target at 100 yards. 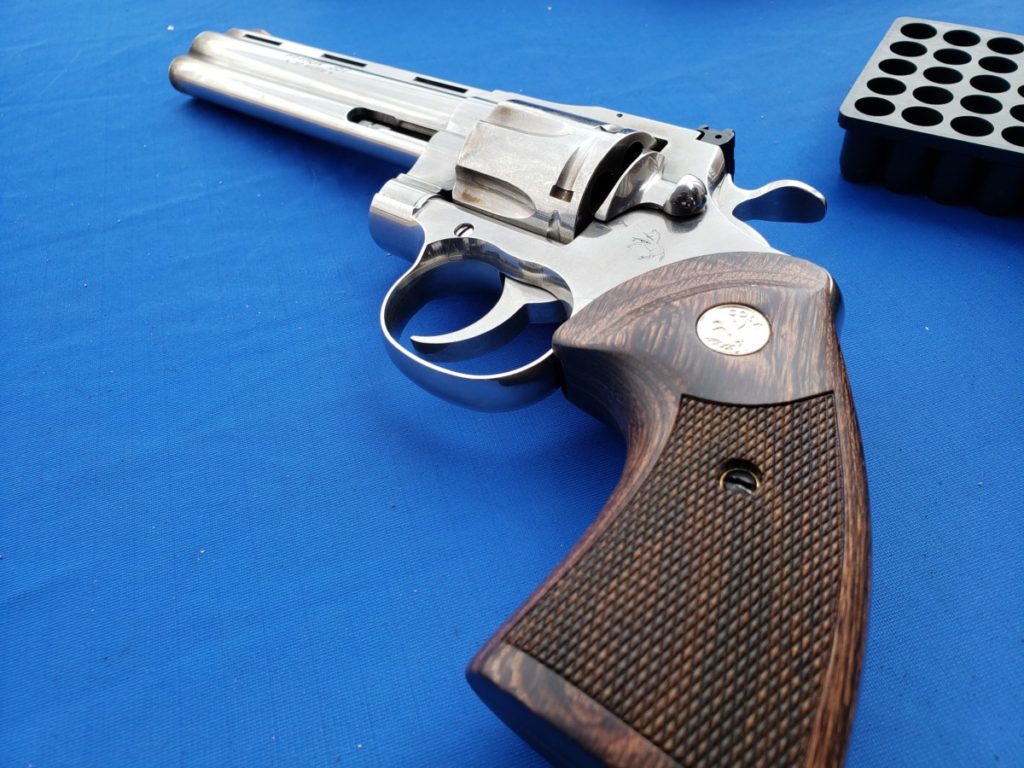 Unlike the Colt King Cobra, the Python has zero issues with the ejector rod due to differences in design. Keeping in line with the reproduction mindset, legacy holsters, speed loaders, grips, and more function in the 2020 Python. This is a gun I plan on buying.

H&K's most exciting product on display was their long overdue optic ready VP9 pistols. These use a mounting plate similar to the Glock MOS, using two screws that drill down into the slide. Other changes include a Hi Viz front sight, and an all black rear sight. Magazines have been increased to 17 round capacity from the previous 15 rounds.

According to the H&K representative, the VP9 Optics Ready pistols ship with a simple smooth plate. Shooters need to contact the manufacturer to get their preferred optics plate sent to them, with support for major optics available from the outset. For ACRO users, contact Aimpoint to get a plate for your VP9. No specific pricing was given for the plates, simply "I don't know, $15-20, something like that."

While not an entirely new product, the Belle of the ball during Range Day for Kel Tec was their integrally suppressed Sub2000. This gun features a massive suppressor shroud extending the entire length of the barrel. Iron sights have been removed, with a monolithic picatinny rail adorning the top of the suppressor. The bottom half features two segments of rail interrupted by a polymer handguard. The bolt has been updated with brass components to improve reliability. The suppressor can be dissembled for cleaning, which is recommended to be done every 500-1,000 rounds. 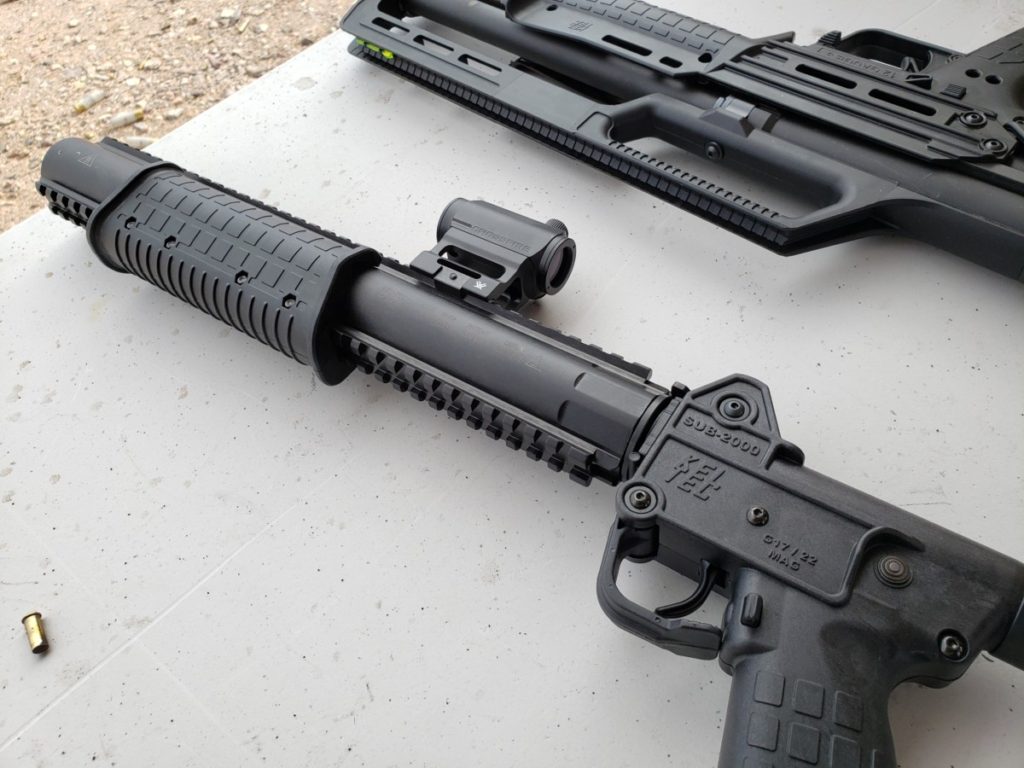 Currently Kel Tec is producing these in a pseudo made to order fashion. Per the rep, they're testing the waters to see how much interest there is before going into full production. With this in mind, there is no firm release date, or MSRP, though the estimated price is around $1,000.

Kel Tec has released an updated "Tactical" model of their RDB rifle. The new version sports an aluminum MLOK handguard in place of the original polymer version. I dumped 30 rounds through the gun and the handguard only became mildly warm. There is a few milimeters of play in all cardinal directions with the new rail, to include forward and backward, with minimal force applied. 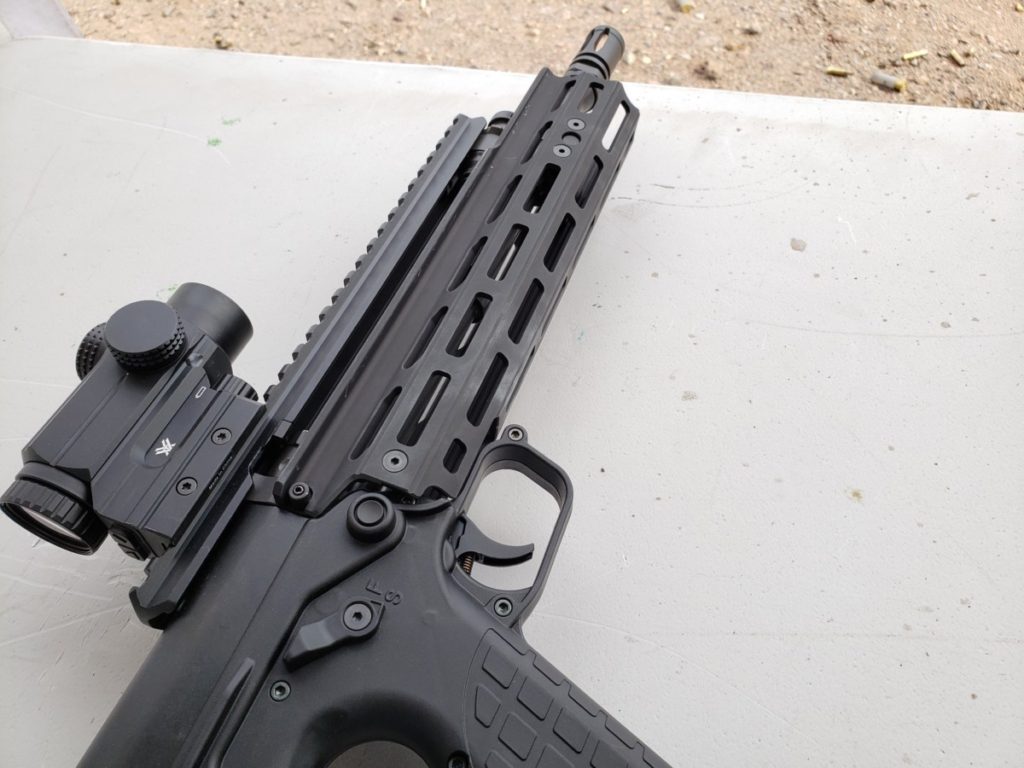 Mossberg had their newest shotgun on display during range day, with several models laid out for us to shoot. The legend himself, Jerry Miculek was on hand to show us how to properly run the scattergat and answer what questions we had. Lightly loaded Winchester AA birdshot was the day's diet for the guns, meaning there was no chance to test them with buckshot or slugs.

I fired about a dozen rounds through the gun before moving on. The trigger is excellent, with a crisp break and very little takeup, and a short reset. You can feel the bolt reciprocate through the gun during firing, though recoil is minimal due to the gas system and nice recoil pad. The widened loading port makes rapid reloading a breeze, and helps to facilitate quad loading. The elongated lifter and lightly tensioned shell interrupter makes the Mossberg 940 JM Pro possibly the easiest loading shotgun I've touched.

There was one malfunction I witnessed throughout the course of about a dozen shooters. Two shells fed from the magazine tube, binding up the lifter. This is easily fixed, but a killer on the clock and in a defensive encounter. The 930 JM Pro seemed plagued with issues such as this, so it'll be interesting to see how reliability works out. Mossberg was the second booth I visited during Range Day, so the guns were clean and well lubricated, ruling that issue out.

Among a smorgasbord of pistols and shotguns, I managed to find Rock Island Armory's new .357 Magnum and 9x19 revolvers. Upon not-so-close inspection, it turns out these are Alfa Project revolvers, with some RIA logos emblazoned on them.

I first fired the AL9.0 9mm revolver, which is fed with moonclips. The double action trigger pull is surprisingly nice, and the sights were mostly on target, hitting a little high at roughly 7-10 yards. I was able to repeatedly put down a plate rack with only a few hiccups. The moonclips insert and eject from the gun without fanfare, and the cylinder locks up nicely. Recoil is a bit stout with some hard rubber grips, but nothing unpleasant.

The .357 Magnum AL3.0 and AL3.1 revolvers are a different animal entirely. I'm not sure where the disconnect is, but each of the four .357 revolvers I handled all had awful triggers. Heavy, gritty, and inconsistent, these were hands down the worst triggers I've felt on a wheelgun. Hopefully the nice trigger on the 9mm is not the outlier here.

Rock Island's rep mentioned upcoming 4 inch barrels for both the .357 Magnum and 9mm lines, but gave no indication of timelines or pricing.

The new Savage Renegauge is the one gun that took me over to the trap/skeet area during Range Day. I've shot clays on and off again with no regularity over the last ten years, but it is far from my area of expertise. Despite this, I managed to obliterate 90% of the birds thrown for me. I fired both 2-3/4" light loads, and 3" magnum shells. The gas system of the Renegauge makes the magnum rounds feel like a low recoil 2-3/4" slug. By that I mean with proper technique, you could shoot hot loads all day.

Much like with the Mossberg 940 JM Pro, the Savage Renegauge features several components optimized for 3 Gun style competition. This seems unusual on a "hunting" shotgun, until the representative confirmed ongoing work on both competition and tactical models of the Renegauge. No dates or prices were mentioned regarding the new models.

Palmetto State Armory (PSA) came to SHOT Show 2023 with a lot of cool things. However, the H&R line, with their retro rifles caught my [...]

Dan and I had the opportunity to try out the Brownells BRN-4 rifle at range day, and inspect it at SHOT. While I'm not a [...]

Today we checked out some of the latest releases from Glock during SHOT Show Range Day 2023. Check out the details below. Glock 47 While [...]