It is no secret that Strike Industries turns out some of the most interesting AR-15 parts on the market. I think Strike has a bottomless pit of ideas because they turn out new and exciting products at a rate that makes me believe that there might be some sort of witchcraft involved. No matter how they come up with this stuff, Strike never disappoints.

I was brought on to The Firearm Blog as a Staff Writer a few weeks ago (This post has been put up 6 months after it was initially posted on TFB) to take some of the review load off of Alex C. so he can concentrate more on TFBTV. It was only a few days after everything was finalized that Phil sent me an email giving me a heads up that Strike Industries was going to send me a drop-in handguard for review. I was pretty excited about it because my SBR was in desperate need of updating. I had been running a Knight’s Armament M4 RAS for almost the last decade on my primary rifle. 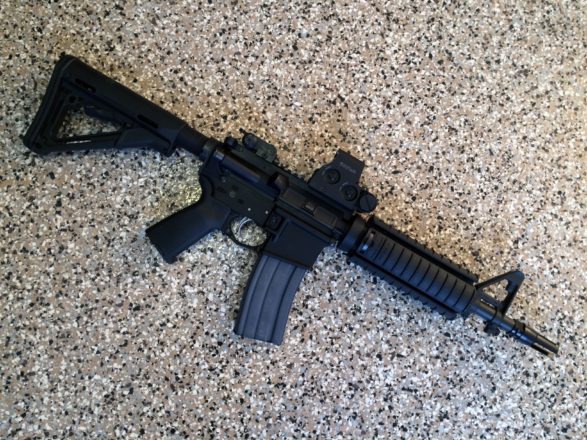 I started out by taking a look at the new handguard. Strike did an outstanding job with the packaging, so many of the accessories sold today are sold in plain boxes. The well-designed box was a refreshing change. 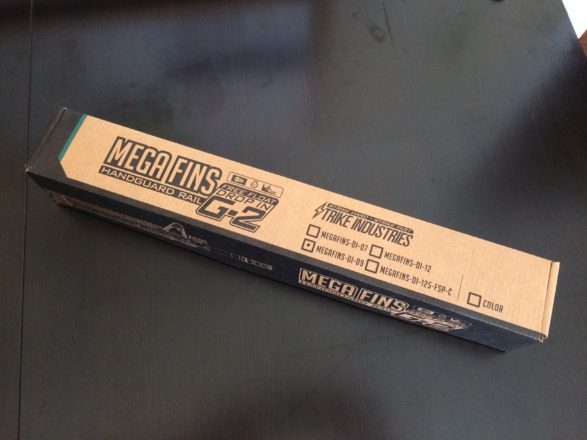 Below is Strike Industries’ description of the Mega Fins Drop-In Handguard.

Strike Industries is proud to introduce our two piece Key-Mod free floating drop in handguard. Available in four lengths to fit virtually any configuration you may have including a 12” carbine length FSP cutout model. This rail has extremely solid lock up! Drops right in, no gunsmith installation required and installs in just minutes! This rail incorporates a monolithic type continuous MIL-STD 1913 top rail and full 7 angled Heptagonal Key-Mod sides for optimum accessory placement. Our Drop-In Mega Fins two piece free-float hand guard is lightweight, rugged and is hard anodized to military standards. If you want the look of a one piece hang guard without the hassle this rail was made for you.

The handguards were packaged in some bubble wrap to protect them in shipping. Strike was nice enough to include the required hex wrenches needed for installation as well as some cool patches. 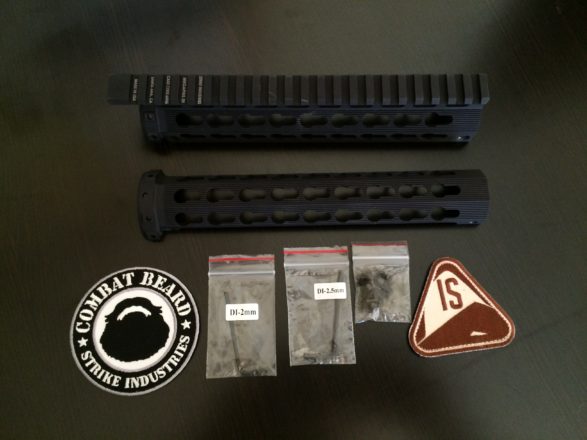 Now, I had a bit of a problem. I have a fixed front sight post on Dusty (the name affectionately given to my SBR during a hunting trip) that I am going to have to replace with a low profile gas block. Thankfully I had a spare gas block in my parts bin. I started with pulling the muzzle device. 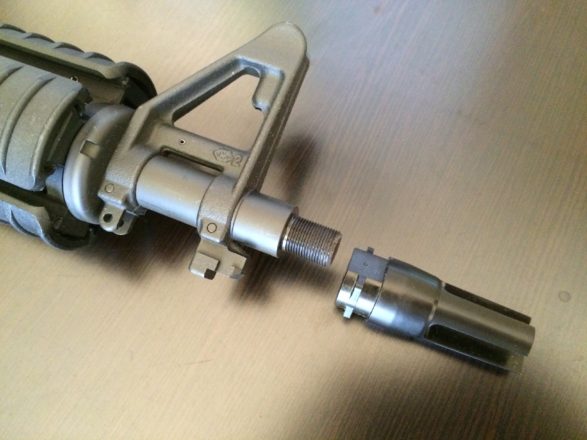 After a bit of work, the upper was ready to get the new handguard. I do want to stress that on most rifles this wouldn’t be necessary, many new rifles are offered with a low profile gas block from the factory. 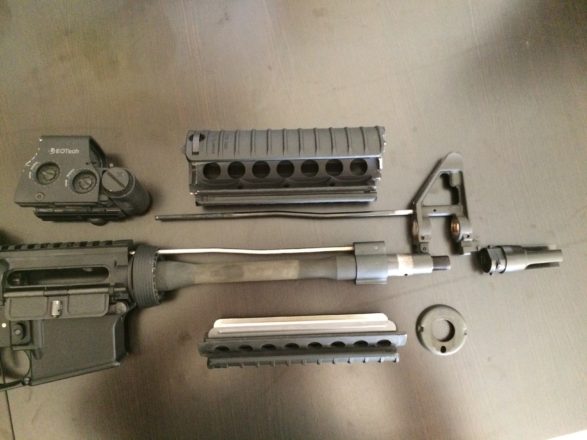 Now to install the new handguard! As you can see the drop in rail fits over the barrel nut like a lot of aftermarket handguards making installation extremely easy. 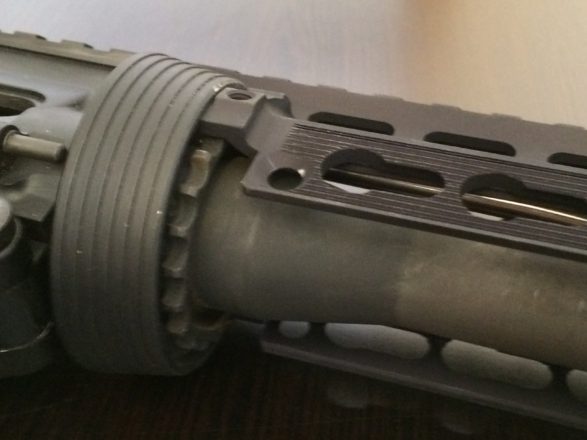 Installing the top part of the handguard. 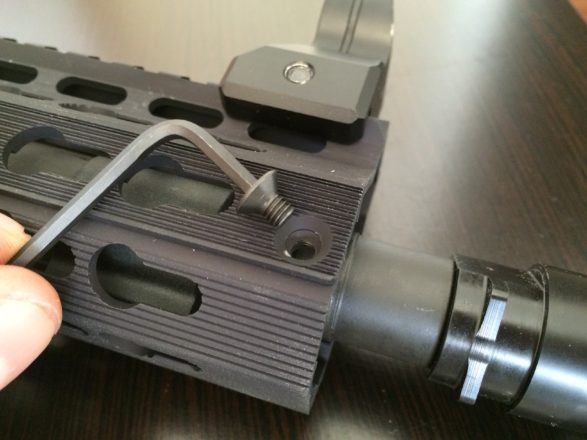 The next step is to install the 9 set screws that keep the handguard in place. Make sure to use the short set screw on the bottom of the rail. 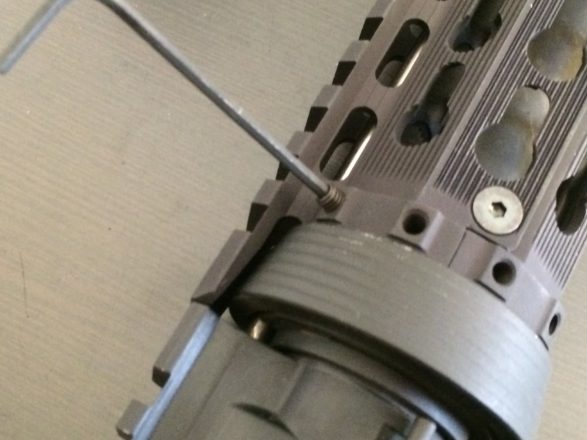 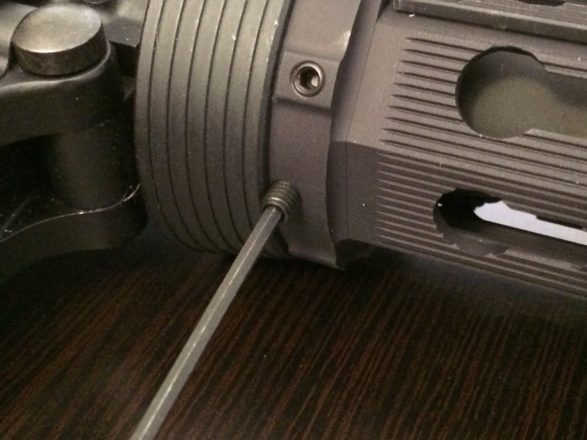 Don’t forget the short set screw is for the bottom hole! 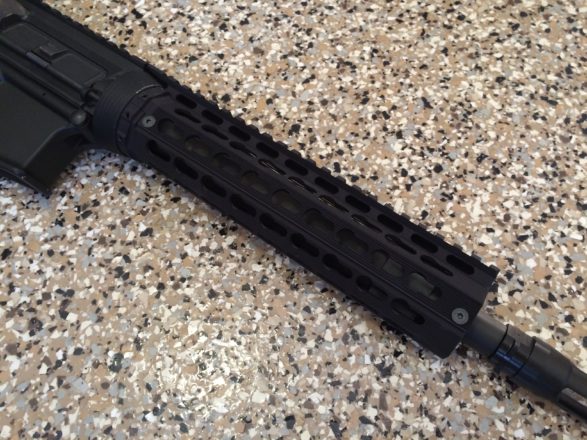 The top rail alignment is spot on. This is something I have had issues with in the past with other rails. 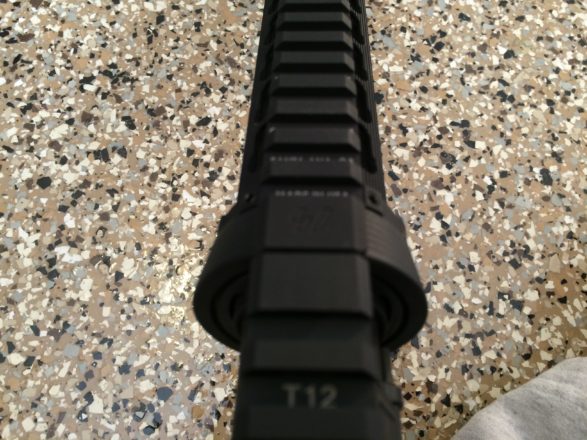 Now to throw some HK drum sights on the rifle and call it done. 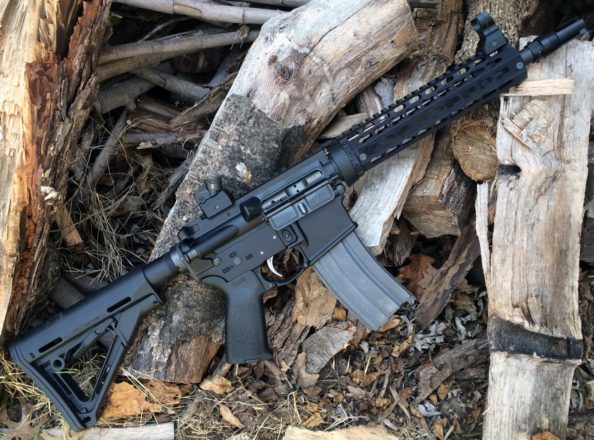 I am really impressed with the quality of the Mega Fins Drop-in handguard. If you happen to be in the market for a free float keymod handguard I highly recommend that you check out Strike Industries offerings here. With several length options (7″,9″,12″, and a 12.5″ front sight cutout version) they will have a product that fits your application.

The MSRP of the handguard tested is $149.00, other models range from $139.00 to $159.00 depending on length. They are rather reasonably priced, especially when you consider that many free float rail systems top the $300.00 mark.

This post originally was run on The Firearm Blog - http://www.thefirearmblog.com/blog/2015/03/13/strike-industries-drop-free-float-mega-fins-handguard/