I want to let all you in on a little secret. Some guns are just too impactful on a shooter to let you go through life without shooting them. Many of you may already have spent some time behind some of these rifles, but I have a feeling that some of you shooters haven’t shot all five. Let’s take a look at what I feel are five rifles that you should shoot at least once. 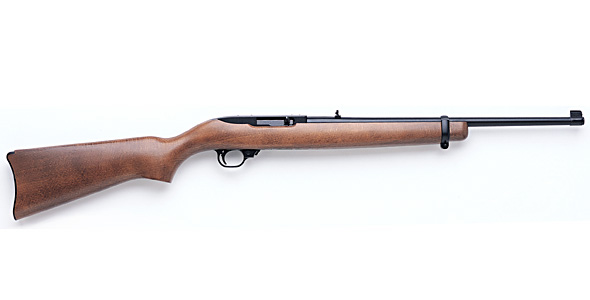 The Ruger 10/22 has been a staple for many new and experienced shooters alike for over 50 years. Not only is it incredibly accurate and reliable, but it is infinitely customizable with thousands of options for aftermarket stocks, barrels, triggers and so on. With the price to get into one of these rifles at right around the $220-$240 mark, not having one in your collection is a disservice to yourself. Right out of the box, they provide a very pure shooting experience that will make even the best shooter better for pennies on the dollar.

The Remington 700 is the first choice for precision shooters, hunters, police, and military since the early 1960s. A proven platform that lends itself well to whatever task you might have at hand while being almost as customizable as the 10/22. Working on your rifle shooting fundamentals with the strong and accurate bolt action will teach a shooter many things—along with how to handle a good bit of recoil. There are few things as much fun as lobbing big .30 caliber bullets hundreds of yards onto a tiny target. Going through life without experiencing the Remington 700 would be just wrong. Some of my most enjoyable range days have been spent behind one on the 500-yard bench.

Marlin introduced the 336 in 1948. Since then, no rifle in America that has put more food on hunters’ tables.

Marlin introduced the 336 in 1948.  Since then,  no rifle in America that has put more food on hunters’ tables. I almost chose the Winchester 94, but felt the side ejecting 336 would be a better fit for the modern shooter because it allows you to mount a scope low to the receiver. It is hard not feeling like a cowboy when cycling the lever action. I have to admit, the 336 is quickly becoming a fast favorite of mine. I really enjoy the hard-hitting .30-30 cartridge when milling around in the hunting lease’s dense forest. The 336 rides with me in the truck just in case I run out to the lease on a whim. Getting into a good lever gun can be done for under the cost of a name brand handgun making it an affordable rifle to add to your collection.

The thought of going through life without experiencing America’s most popular self-loading rifle gives me chills. It has become one of the most adaptable rifles on the market with a blue million calibers to choose from, barrel lengths, different stocks, and accessories coming out the wazoo. The AR-15 in its purest form is the rifle that you really should get behind. The 5.56 (or .223 Remington) is incredibly light recoiling while still packing a nice punch downrange. I personally introduce most new shooters to a self-loading rifle on a 20-inch AR-15 with standard A2 carry handle with iron sights. The beautiful thing about the AR-15 is that after you spend some time on the rifle, you can modify the rifle to your taste.

Who can say no to the classic AK-47 chambered in the powerful 7.62×39 cartridge? It isn’t me, that’s for darned sure. Right now is an exciting time for those of you that are after an AK-pattern rifle with so many great options on the market and big manufactures—Magpul et. al—getting behind the accessory market. The rugged reliability that has made the AK legendary is something that every shooter is sure to enjoy. Out of all the centerfire rifles on this list this one is the most economical to shoot steel-cased 7.62×39 ammo coming in at under a quarter per round. Couple the inexpensive nature of the ammo with the industrial feel that the rifle has in your hands and you have something really special that you should really treat yourself to.

There you have it. Now get out there and shoot these fine rifles, your trigger finger will thank you.