Latest Reviews
UPDATE: We have received a photo of the policy from a reader, you can read it below.

Academy Sports + Outdoors, a southern US sporting goods chain is reportedly pulling modern sporting rifles from their shelves in the wake of the attack in Orlando. According to Reddit user Potato_Muncher, the move to pull rifles from the display rack was at the request of the corporate offices in Texas. According to u/Potato_Muncher, the rifles will still be available for sale but not on display leading many buyers to believe that there are no rifles available.

TFB also received information from an Academy employee that requested to remain anonymous that there are even more changes. Our informant stated that Academy Sports corporate hosted a conference call requesting all modern sporting rifle lighters and other gifts are being pulled from the shelves along with all the airsoft and bb guns resembling an “assault rifle”.

The most shocking development is that the conference call outlined a new policy requiring any sale of more than 10 boxes in a caliber that Academy deems an “assault rifle caliber” will require the buyer to furnish personal information that Academy is planning on keeping in a database, other employees have stated that they were just directed to “report the transaction” with no clear outline on how to do so.

TFB reached out to Academy Sports’ media department and has not received comment at this time, we will update as we learn more information.

UPDATE: We have received a photo of the policy from a reader, you can read it below. 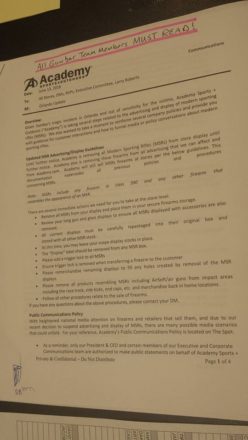