I was able to stop by the DC Machine booth this week, and speak to one of their head engineers. He was very knowledgeable and filled me in on their background and some of their metrics.

DC Machine is a manufacturer of many of the components that make up many of the AR15s, and AKs in the USA. They prominently make barrels, and receivers, and in astounding numbers. I was told that they makes 2,500 barrels a day. Let that sink in for a second. 2,500 barrels per day. That's roughly a barrel churned out every 35 seconds. I was really, really impressed by that. I was also told that DC Machine has a less than 1 percent return rate on their products. That is some real efficiency.

The way that DC Machine can have those numbers, is through strict quality control. They keep metrics on all of their machines so that if something happens to show an issue, they can correct it almost instantly. An ounce of prevention can stop a pound of pain, and they know this. The engineer that I spoke to told me that he will grab one of the random barrel blanks, get it rifled and finished, and then put it into a receiver. He'd then shoot a playing card at 50 yards, and try to split it within 3 rounds. If it isn't happening, they go back to the QC process and start over. 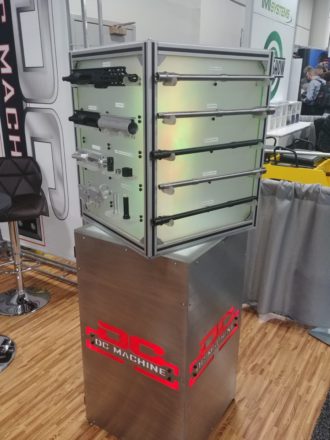 Some of the components that DC Machine had their booth.

These are merely some of the amazing numbers that I heard at the DC Machine booth at SHOT 2019. Their products tend to be quite reasonably priced, and knowing about their QC process gives me much respect for them.