Last Friday Facebook announced plans to take a new, very active role in preventing users from advertising their firearms for private party sale. Many of you will have seen the news being reported on by the mainstream media, but something I found missing was a source where Facebook directly stated that they were going to curb the face to face transactions that many of these groups thrive on. I reached out to the Facebook newsroom for some clarification as to what they are planning to do if anything.

I asked Facebook “Recently it has been reported in the news that Facebook will be baring users from arranging sales of firearms using the site. Can you expand on this further? Will this mean that Facebook will disallow gun sales groups where private parties find other private parties to coordinate an offline sale?” Facebook’s Jodi Seth responded with “Hi Patrick – yes, that’s what it means.” I was unable to get Facebook to provide a press release or expand on their decision further, Jodi stated that she would provide me with some background on the decision but I have not heard back at this time.
I have noticed many of the groups changing their name to something like “Hardware Exchange” or something of the like in an effort to stay low key, I am doubtful that this will work as Facebook certainly has all of the old data backed up on a server and is relying mostly on tips from users in that group to shut down offending groups. Since the last response from Jodi Facebook has shut down several firearm sales groups and I have been getting reports of people who were administrators for those groups that after they have their group shut down some of them are being temporarily banned. Facebook’s sister site Instagram has also adopted the same policy and is prohibiting private parties from advertising their firearms for sale. 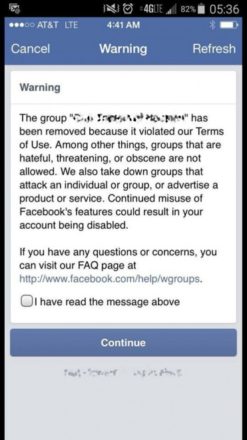 This post originally was run on The Firearm Blog - http://www.thefirearmblog.com/blog/2016/02/04/facebook-cracks-down-on-firearm-sales/