There is a super easy way to fix a gritty Glock trigger with nothing more than a nail file and a clean cloth.

while some might dismiss this as kitchen table gunsmithing (it really is) there is a real benefit to be had if you are careful in removing material from the connector to smooth things out.

I will write up a post on the five-cent trigger job later, that really is a separate thing. This tip just removes most of that grit you might feel in with a stock or aftermarket Glock trigger when taking up the slack to the “wall” of the trigger pull.

Why Is Your Trigger Gritty?

Several things can cause a gritty feeling Glock trigger, but this is the most common of them in my experience by quite a lot. Other factors that could cause a gritty trigger include rust, damage to the trigger bar or connector, debris in between the trigger bar or connector, or even the buildup of dried up lube. Thankfully it isn't hard to fix a gritty Glock trigger, you just need a Glock punch and an understanding on how the internals work.

We really need to examine how a Glock trigger works for you to fully understand why removing a slight bit of material improved the trigger feel.

The part that we are concerned with is the camming surface on the rear of the trigger bar that is depicted as a dark salmon color in the gif below. When that part passes the rearmost edge of what is called the connector (the lighter salmon color part) many times it will contact a burr that is left over from the stamping process.

Below you can see how these parts look when removed from my Glock 17 C. The trigger bar rides along the connector tightly, any surface irregularities will cause the trigger to feel gritty. This is also an area you might want to clean now and again if you notice a degradation of how your Glock trigger feels. 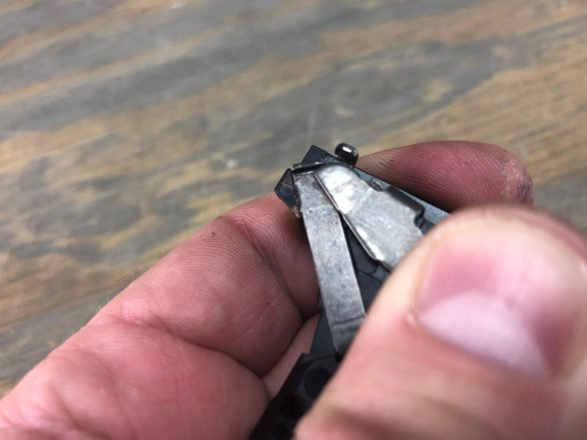 So what part is interfering with the trigger bar? There is a very tiny burr on the connector left over from the stamping machine they are made on. You can barely see it in the photo below, but notice that slightly raised section that the arrow is pointing to. 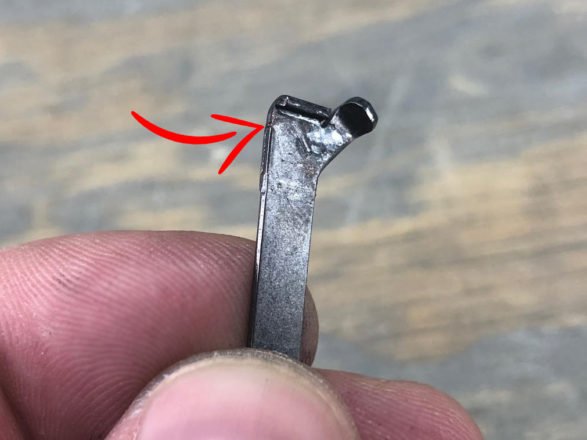 How To Fix It

Now that we know what is causing the gritty feeling trigger, time to tell you how to fix a gritty Glock trigger.

As you might expect from the title, we are going to use a small file to remove the offending burr. Be careful to not touch the ledge that overhangs the face we are working on, any scratches on that surface and your trigger will be worse than before potentially. 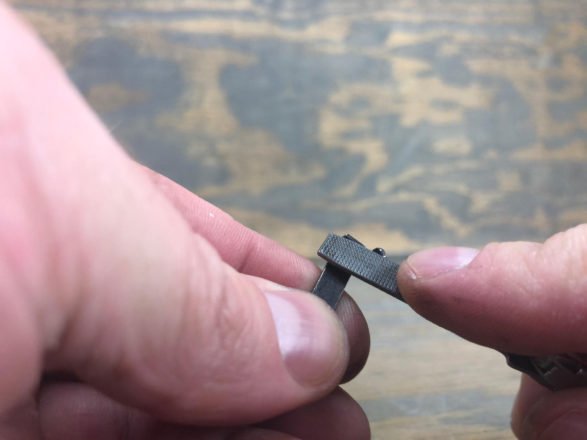 Once the burr is removed, notice the uniform appearance of the back edge of the connector. No longer will the trigger bar have to overcome or ride over a surface that isn't entirely flat. 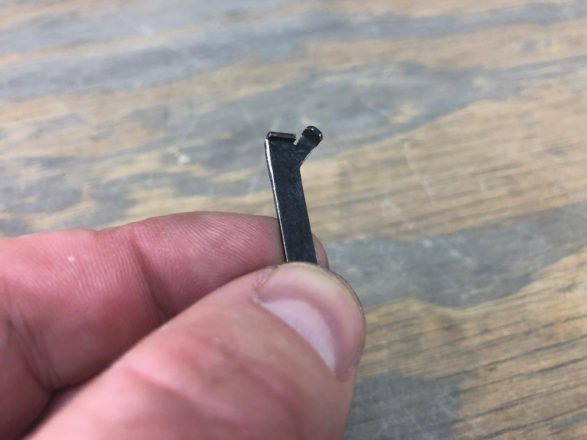 Can It Happen To Aftermarket Triggers?

Any Glock style connector can suffer from a burr that degrades trigger feel since most aftermarket trigger companies either source their connectors directly from Glock and either polish them or coat them in something like NP3 or they acquire them from a third party company like Lone Wolf. Thankfully the steps to fix a gritty Glock trigger that has a burr on the connector is the same regardless of who makes it.

While it isn't common, I have seen Zev, Agency, Overwatch Precision, factory Glock, and Apex triggers that include a connector have that slight burr on the connector right out of the package. Now, most people might not even notice it when shooting or dry firing, but the more time you spend shooting a pistol for accuracy, the more likely you are to notice it.

I want to remind you to be careful when removing material from the connector, it is an integral part of the fire control group and modifying it can impact how your pistol functions, or more importantly, malfunctions. We recommend that you have a Glock certified armorer work on your gun, working on your gun yourself not only can be a liability but may also void your warranty.

Do not hold me liable for any foolishness you get yourself into if you decide to ignore my plea to not work on your own pistol but to take it to Glock Armorer instead, that decision is all your own.

Glock has announced that they have delivered 100,000 Glock 19X pistols in less than 6 months! That is one hell of a feat considering that [...]

Just a few hours ago Larry Vickers released a teaser video of his new special edition Lipsey’s Glocks that are to be formally announced tomorrow, but it [...]

Why the Glock 48 is Popular with Women

For the first time in my life I am considering purchasing a handgun. I have received a lot of recommendations for the Glock 48 from [...]