The first gun I ever bought was a Glock 48. It was purchased in March 2019 after an intense search that had me shooting close to 20 different handguns before making a decision. I always knew I wanted to carry, so right after I purchased it I began the hunt for a holster. I was on my own and had no idea where to start so I went to Google like any good red-blooded American. A Glock forum was the first thing I found and close to 90% of those responding recommended the Vedder LightTuck Holster, so that's what I went with.

It's important to note a couple of things here at the beginning. First, as I said, I was a first-time gun owner. I didn't know what I didn't know, but darn it I was determined to learn. Second, the Glock 48 had been on the market all of two months when I bought mine. The after-market options were pretty slim, so it's possible that Vedder just beat others to market with their holster and that's why it was so highly recommended. Third, it's generally a bad idea to take advice from these kinds of forums. I've learned this now, but see point #1 for where I was then. Most of these forums are full of people just as uneducated as I was as a new owner, and many don't even bother to learn. So, onto the Vedder LightTuck Holster Review. 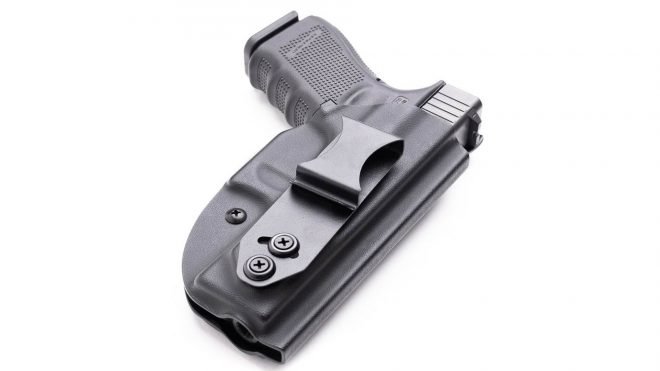 The Vedder LightTuck is an American made, kydex, inside the waistband holster. Each holster is custom-molded for your specific gun make and model. You can select right or left-handed and there are a variety of colors to choose from. The LightTuck has screws for adjustable ride height and adjustable tension. It also offers 30 degrees of adjustable forward and reverse cant. The end is partially open and will accommodate most threaded barrels. The sight channel is deep enough for all standard sights and suppressor sights up to 10 inches in height.

All of these features make the LightTuck easily customizable for your specific needs. The adjustments were easy to make and contributed to the overall comfort and functionality. I did have ongoing issues with the cant screws coming loose throughout the day causing my firearm to move around. I eventually glued them in place, which isn't ideal but solves the issue.

The Vedder LightTuck attaches to your belt with a spring steel clip. You can select clips to fit standard 1.5” belts or the bigger 1.75” ones. The clip is easy to don and doff while maintaining an incredibly reliable hold on your belt. You can also choose an optional claw attachment. The claw helps draw the grip closer to your body, improving concealment. There is an additional $8.99 cost for the claw, which would definitely be worth it.

The retention on the LightTuck is fantastic. Vedder touts that their “fit is so precise you will hear an audible 'click' every time you holster your gun, reassuring you that your gun is securely in place”. I put the LightTuck through several hard sessions and never had an issue with retention. 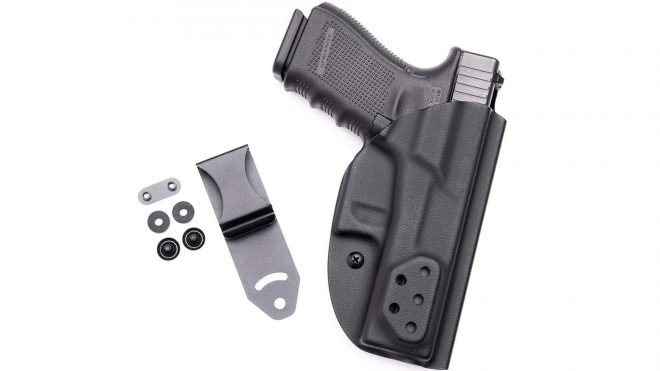 The Vedder LightTuck holster has a ton of adjustability. Getting it just right is key to comfortable carry.

Even when using the restroom and the weight of the gun would flip the holster upside down (something I practiced long and hard to prevent now), it stayed tucked safely in place.

I used the Vedder LightTuck as my everyday carry holster for a little over a year. I carried at around the two-o'clock position. During that time I was pretty happy with the holster. I felt like it concealed well enough, even if not perfect. Tighter clothing was harder to conceal under. My employer at the time had a no-gun policy, but rumor has it that some employees *winkwink* carried anyway. I would regularly wear layers to ensure complete concealment. While I did not have the claw attachment, I would highly recommend it for anyone looking to get a Vedder.

Besides carrying every day in my LightTuck, I used it for several classes. Some of these classes were very active and involved a lot of moving around. I wore it through the Low Light Pistol class and Close Quarters Handgun Deployment class with Chuck Haggard. The Mid West Tactical Defensive Handgun class also gave the holster a run for its money. In the Mid West Tactical class, we did quite a bit of shooting around barriers from various positions. I shot kneeling, squatting, and laying prone. No matter what we did the Vedder LightTuck kept my weapon safely in place.

One of the most common things people do is look for validation for their decisions. Buying guns and gear is no different. I spent an entire year not willing to look at other holster options because the Vedder LightTuck was fine. The thing is, it wasn't great.

A few months ago I started carrying in a Tenicor Velo and have been kicking myself nonstop for not switching sooner. The concealment and comfort the Velo offers is far better than the Vedder. That's not to say the Vedder is bad. It's just not as good as it could be. I also switched from the two-o'clock position to the true appendix position which makes sitting especially more comfortable. I had tried appendix with the Vedder but found it too uncomfortable.

So would I recommended the Vedder LightTuck holster? Eh, I wouldn't necessarily discourage someone from getting it. At $59.99 it's a decent value quality holster. The retention is excellent and it can be concealed reasonably well. For someone like me who travels quite a bit, the comfort just isn't there. However, it's a solid choice for the average gun owner looking to carry for a few hours during the day.