For the second in our Defensive Shotgun series we'll discuss ammunition selection. One of the main attractions of the shotgun is the diversity of ammunition they are capable of employing. From squirrels to polar bears, and everything in between, there's a shell for you. We'll break down the three most common types of shot here. There are more exotic loads available, but those are largely for fun, with little to no place in a defensive firearm.

First off, what is "shot"? Shot is the projectile being fired through the shotgun. Typically several small, spherical projectiles known as shot or pellets. Shot is typically made from lead, but can also be steel, copper, rubber, and more. Shot is contained in the shotgun shell, also known as a shotshell, shell, which is typically made from plastic with a metallic base.

Once shot has left the barrel, the pellets begin to spread. If you've seen movies or played video games, you're probably familiar with this concept. Spread can be affected by several factors, including the quality of ammunition, the gun's barrel, choke tubes, and more.

Birdshot is for the birds, literally. These shells are filled with tiny pellets, somewhere between the size of a very coarse grain of sand, to just over the size of a BB. For the mathematically inclined, that's roughly 0.08-0.20 inches per pellet. An average size 2-3/4" shell can contain as many as a few dozen to 350 pellets depending on the size of shot. Labeling goes from #9 shot at the small end, up to 1, then BB, BBB, and T at the large end. In my area, 9, 8, and 7-1/2 are the most common sizes.

When applied to defensive applications, birdshot is hailed as something that can stop a threat without penetrating the walls of a home. This unfortunately is not the case. Due to the low size and weight of birdshot, it does not have the capability to appropriately penetrate a threat, rapidly losing its energy upon impact. FBI protocols mandate 12-18 inches of penetration in their testing medium for defensive ammunition. Birdshot frequently sees as little as four inches.

What does this mean? A blast of birdshot will likely create a surface level wound, something that looks nasty but is largely nothing more than a scrape. Something incapable of incapacitating a threat, leaving them able to continue their attack. We frequently see criminals take hits and walk to the ambulance. Former Vice President Cheney accidentally shot a 78 year old man in the face with birdshot. Despite this, he spent under a week in the hospital with no serious injuries. If an unsuspecting 78 year old can take a blast of birdshot, a determined attack can too. Unfortunately, if a round is capable of stopping a threat, it's also capable of going through walls.

Buckshot is the next step up, size wise. Pellets range from 0.24-0.36 inches in diameter, with standard shells containing roughly 8 to 27 pellets. Labeling starts at #4, going up to 000 (triple-aught) from smallest to largest.

00 buckshot is the most common buckshot load, used in hunting, law enforcement (LE), military, and personal defense for decades. This is the loading that has propelled the shotgun into the "#1 single shot fight stopper" spotlight. With 00 buckshot, there are both 8 and 9 pellet offerings, with 8 pellet widely being regarded as more accurate across all brands of ammunition. Interestingly, #1 typically outperforms 00 in terms of accuracy and terminal effectiveness, but has never been as popular or widely availably as its bigger brother. 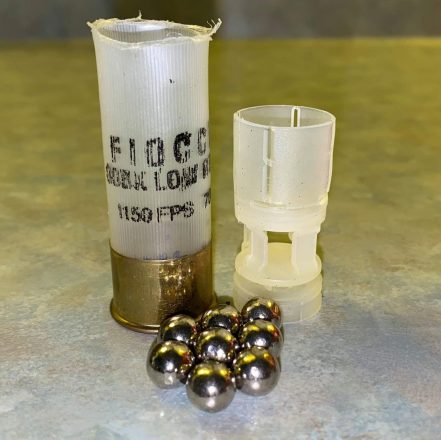 In years past, #4 was widely in use by LE, due to it's ability to stop threats, but quickly fell out of favor after repeated failures to penetrate obstacles. This however can be a benefit to the home defender; getting solid effects on threats with reduced likelihood of overpenetration. In an apartment or townhome, #4 is load of choice for the defensive shotgun.

To visually illustrate the destructive power of a shotgun paired with buckshot, I'll add in a few quotes. Tom Givens, of Rangemaster, is a known advocate of the shotgun. In class we hear him say that a shotgun can "amputate limbs", whereas a pistol "drills holes in people". Clint Smith of Thunder Ranch, another legend of the training world, speaks of shotguns "removing flesh from bone". If these don't get the point across, I don't know what will.

Unlike birdshot and buckshot, where the shell is filled with pellets, a slug is a single, solid projectile. Think of it like a huge bullet. Sizes vary depending on the caliber (gauge) of the paired gun, with a 12 gauge slug being 0.79 inches. The average weight of this round comes in at one ounce, or 437 grains, roughly eight times the weight of a pellet of 00 buckshot.

Slugs are known for their penetrating power, frequently being the round of choice for those operating around vehicles or dangerous game (IE grizzly and polar bears). Being a single projectile, accuracy at range is substantially increased, a topic we'll discuss at a later time. With these advantages, why would someone choose something other than slugs for personal defense? Overpenetration. 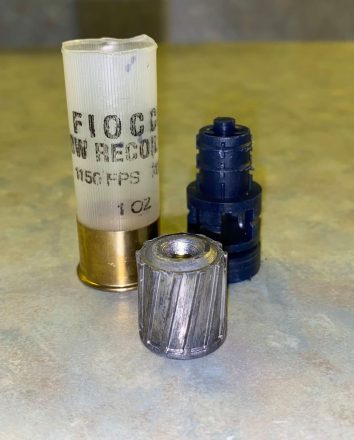 A slug retains its energy exceeding well, which is part of what allows it to penetrate vehicles, large game, and other barriers. If you were to miss your target, a slug will have more than enough energy to go through walls and still be lethal. Even if you get a solid hit on a threat, more likely than not, the slug will pass through them with potentially enough energy to harm those on the other side.

It is because of this, that slugs are typically not recommended in defensive shotguns. The average person likely will not have to take a shot at distances where slugs shine, and their penetrating power is more than what is practical in the home. For those on farms or other rural areas without tightly packed homes, this may be another story. Everyone else in suburbia or the urban jungle, you'll be better served with some flavor of buckshot.

We've probably all heard the term "twelve gauge" in reference to shotguns. You've seen me mention various sizes of shells. What does it all mean? Glad you asked.

Gauge refers to the diameter of the inside of the shotgun's barrel, the bore. With handguns and rifles this is called caliber. There's some history as to why shotguns use "gauge", but we won't get into that here. The smaller the gauge number, the larger and more powerful the gun is. In the US, the most common shotgun gauge is the 12, followed by the 20. Historically we saw more popularity with the 10, 16, 28, and 410 gauges, but those have faded over time, now almost completely restricted to niche hunting roles.

Within some circles it is popular to recommend a 20 gauge to smaller framed people, due to the reduced power of that round. This can sometimes be counterproductive. Often times, a 20 gauge shotgun is lighter than a 12 gauge, which results in more felt recoil, negating the effect of the weaker round. Additionally, ammunition and accessory selection in 20 gauge is lacking compared to the 12. This can severely restrict your ability to maximize the performance of your chosen shotgun.

As mentioned above, shot begins to spread as it leaves the barrel of the gun. Think of it like a cone, with the point in the barrel, and the wide base facing downrange. As distance increases, so does spread. A rough rule of thumb is one inch of spread for every yard the pellets fly. Again, this is extremely rough, as we'll detail below.

Choke tubes can be used to constrict the shot pattern. A tighter pattern means that you can keep pellets on target at further distances, allowing for greater precision up close. Not all shotguns allow for choke tubes, with some being removable, and others being permanently affixed. A cylinder-bore barrel is essentially a non-restricted barrel, allowing the maximum spread possible. This is what most defensive shotguns feature, cylinder bore. When using slugs, most companies mandate the use of a cylinder bore, as a tighter choke can potentially interfere with slug as it exits the barrel.

From tightest to most open, the most common chokes are as follows:

This is not a comprehensive list, as there are nearly a dozen variations on choke tubes. Be sure to test your ammunition with your preferred choke, the results may surprise you.

Patterning, simply put, is how the pellets typically spread when fired from your shotgun. This can change based upon a particular load of ammunition, the construction of your barrel, and several other factors. Since each shotgun patterns differently, it is critical to test your gun with your preferred load. Often times the spread is greater than anticipated, reducing your effective range. Luckily, several manufacturers have stepped up and created shotgun shells which provide tighter spreads even with cylinder bore barrels.

Federal, with their Flite Control wads, and Hornady's Critical Defense line are two such rounds. I've personally achieved roughly six inch groups at 25 yards using Federal Flite Control 8 pellet 00 buckshot in a cylinder bore Mossberg Maverick with a short 18.5 inch barrel. As a comparison, bargain bin Sellier & Bellot 9 pellet buckshot was incapable of keeping all pellets on a 23"x35" inch target from the same gun at 25 yards. Hornady's Critical Defense performs similarly to Flite Control, in my experience, but with slightly more recoil.

Shotgun shells come in a variety of lengths with varying purposes. However, not all guns can accept all lengths of shells. Typically the barrel is marked, indicating what the maximum shell length the gun is capable of handling. This is important, as too large of shells can be impossible to load into the gun at best, or cause catastrophic failures when firing at worst.

Most commonly available is the 2-3/4" shell. This is our bread and butter in the defensive world. Larger shells see diminishing returns in effectiveness with substantially higher recoil. Shorter shells frequently result in malfunctions. Before buying and firing ammunition, be sure to verify what length of shotshell your gun can accept, and the length of the shell itself.

As with everything else on the shotgun, we have a wide selection when it comes to how we aim the gun. From simple brass beads, [...]

Now that you've decided what action, bore size, and model of defensive shotgun you're using, it's time to outfit your gun. There are a variety [...]